The FIH world ranking is not a correct representation of the actual worth of hockey nations on a global scale. It considers the ranking of non relevant tournaments such as the Champions Trophy and the continental championships. Let me explain…

The continental championships are also tournaments that would not be fair to take into account for a world ranking. For example in the Oceanic tournament both New Zealand and Australia only have to show up more or less to gain points based upon 1st or 2nd place. Where as in the European championship there would be 5 top nations battling for the same points. So New Zealand got points for 2nd place just for showing up… where the Germans, for the same amount of points, had to stay ahead of countries like England, Belgium and Spain. that is just not fair… So no results from the continental championships should be considered for a world ranking.

For the world ranking only those tournaments should be considered where all nations have the possibility to participate and where all compete against the same opponents. That would leave us with the Olympics, the World Cup and the World League.
This would give us a different world ranking and…. therefore also different groups for the pool games!

The FIH ranking – The corrected ranking*

*The corrected ranking for August 1, 2016 is based upon the most recent results from the latest olympics, World Cup and World League.

Would using the corrected ranking change the outcome of the Olympic final? Most likely no, because you have to be able to beat everyone in order to get that gold! But in topsport every detail matters and could make a difference and we all want it to be fair. Therefore I do hope the FIH will change the way they do their world ranking immediately after these Olympics 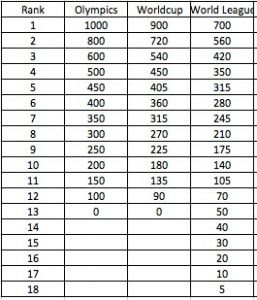 For those into details these are the points I would allocate to the different tournaments, so rather similar to the allocation as done by the FIH right now. Points allocated are at 100% for the first year, then go down by 25% every year following.

But then again… these are just the ranking based upon results from the past and nothing more than a tool for publicity purposes and scheduling first rounds of tournaments. Lucky for all of us hockey is still a sport where we can be surprised by the form of a team on the right day, the bad luck of another, the rise of a talented player, the talent of a new coach pushing the right buttons on his players, etc …. etc ….

So will the ranking, the FIH one or the correct one, be the prediction for the podium in Rio on the 18th of this month? I doubt it, we will be surprised…

This site uses Akismet to reduce spam. Learn how your comment data is processed.